The Economic Implications of the Long-Term Federal Budget Outlook 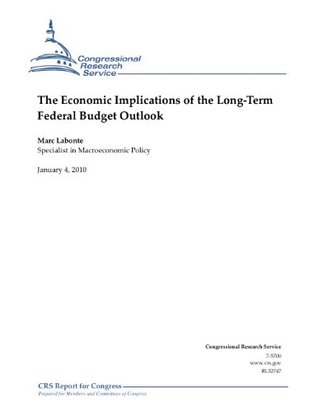 Following the financial crisis, the budget deficit reached 10% of GDP in 2009, a level that cannot be sustained in the long run. Concerns about long-term fiscal sustainability depend on the projected future path of the budget, absent future policy changes. The retirement of the baby boomers, rising life expectancy, and the rising cost of medical care result in projections of large and growing budget deficits over the next several decades. Social Security outlays are projected to rise from 4.8% of gross domestic product (GDP) today to 6.0% of GDP in 2035, and Medicare and Medicaid outlays are projected to rise from 5.3% today to as much as 10.0% of GDP in 2035 and 12.7% of GDP in 2050. These increases in spending are not expected to subside after the baby boomers have passed away. Without any corresponding rise in revenues, this spending path would lead to unsustainably large and persistent budget deficits, which would push up interest rates and the trade deficit, crowd out private investment spending, and ultimately cause fiscal crisis.

To avoid this outcome, taxes would need to be raised or expenditures would need to be reduced. Altering taxes and benefits ahead of time would reduce the size of adjustments required in the future, if the proceeds were used to increase national saving. (Making changes ahead of time would also allow individuals time to adjust their private saving behavior.) National saving can be increased by using the proceeds to pay down the national debt, purchase financial securities, or finance individual accounts. But if the budget savings is offset by new spending or tax cuts, the government’s ability to finance future benefits will not have improved. Individual accounts financed by increasing the budget deficit, however, would not increase national saving or reduce the government’s fiscal imbalance and could exacerbate the government’s fiscal imbalance over the 75-year projection.

Relatively small tax increases or benefit reductions could return Social Security to long-run solvency. Restraining the growth in Medicare and Medicaid spending is more uncertain and difficult, however. The projected increase in spending is driven more by medical spending outpacing general spending increases than by demographic change. But it is uncertain how to restrain cost growth because much of it is the result of technological innovation that makes new and expensive treatments available. If future medical spending grows more slowly than projected, then the long-term budget outlook improves dramatically. From a government-wide perspective, Social Security or Medicare trust fund assets cannot help finance future benefits because they are redeemed with general revenues at a time when the overall budget is in deficit.

The reason revenues are not projected to rise along with outlays is that these programs are financed on a pay-as-you-go basis: current workers finance the benefits of current retirees. In the future, there will be fewer workers per retiree. Once a pay-as-you-go system is up and running and faced with an adverse demographic shift, there is no reform that can avoid making some present or future generation receive less than past generations. Under current policy, future generations will be made worse off by higher taxes or lower benefits. Under a reform that increases national saving, some of that burden would be shifted to current generations. Overall, current budget deficits negate the system’s limited existing prefunding, exacerbating the future fiscal shortfall. While entitlement spending on the elderly is the major driver behind future deficits, it played little part in the growth of the current budget deficit. Reducing the current deficit is the most straightforward and concrete step that can be taken today to reduce the future shortfall.